In the wild, anise myrtle is a medium to tall tree, occasionally growing 45m tall. In commercial plantations, it is pruned for ease of management and harvest, and maintained to the size of a large shrub or small tree.

The leaves of the anise myrtle are dried and ground for tea and spice, or distilled to produce essential oil. Processors and restaurants traditionally sourced leaves from wild-harvested product. However, market demand for consistent supply and concern about the environmental impact of wild harvest on rainforest ecosystems, led to cultivation of the tree in plantations. Anise myrtle performs well and has been an attractive ornamental tree in landscapes and home gardens for many years.

Anise myrtle is a small but stable native food industry.

Anise myrtle is typically grown on farms with other rainforest food species, such as lemon myrtle, cinnamon myrtle, lemon-scented tea trees, riberries, Davidson’s plums and sometimes round or finger limes and other species.

Accurate information is not readily available for the native foods industry but a stocktake of the industry provides good estimates of industry characteristics, production figures and product value.

The industry stocktake reported that in 2001 over 30,000 trees were planted in south east Queensland, and the northern and mid-north coastal regions of New South Wales. Many growers planted several thousand trees in single species stands and these are generally on farms that also have lemon myrtle stands. It is believed that existing plantings have the capacity to produce much greater volumes but there are not the markets available to consume the supply.

Some growers have less than 300 anise myrtle trees in mixed species stands, with lemon myrtle, cinnamon myrtle, lemon-scented tea trees, riberries and Davidson’s plums and sometimes round or finger limes and other species. The concept was based on not creating a monoculture, which provides good pest and disease management, however machine harvesting is then not possible and therefore production volumes are limited. This system suits an operation that value-adds and markets its own product. 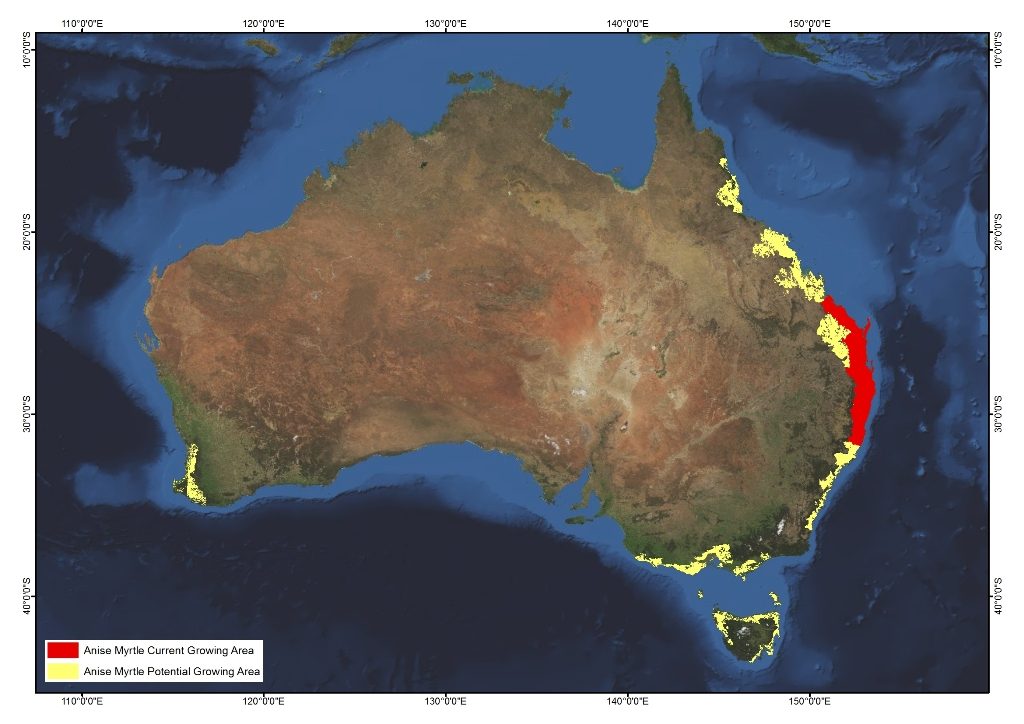 The mature leaves of anise myrtle are mainly dried and ground for use as herbal tea and spice. Anise myrtle is sometimes sold as ‘anisata spice’ and can replace aniseed or star anise in sweet or savoury cooking. It is used in sauces, drinks, curry, cakes and other products. The fresh leaves may be steam distilled to obtain anise myrtle essential oil, which can be used as a food flavouring, or in health, cosmetic and body care products.

Anise myrtle has a range of properties that make it a candidate for use in health and therapeutic products. It has high antioxidant activity and is rich in magnesium and is also a good source of lutein, folate, vitamin E, vitamin C and has been shown to have anti-fungal and anti-microbial properties.

A number of research projects have been conducted to understand and investigate the properties of anise myrtle, and other native foods, including health benefits and health-enhancing compounds in native foods, physiological activities of native foods,  nutritional data, defining the flavours of native foods, and  using native oils for the management of postharvest diseases of horticultural crops.

Most commercial plantings of anise myrtle are located in northern New South Wales and south east Queensland. There may be one or two small operations in South Australia and Western Australia.

Anise myrtle requires well-drained, nutrient-rich soils of medium to heavy texture. The tree grows better on neutral soil than it does on acid soil, and it is prone to yellowing on alkaline soils.

Anise myrtle has a greater tolerance of waterlogging than does lemon myrtle (which has very little), however, it performs best in soils that drain well.

Anise myrtle trees prefer a climate with annual rainfall greater than 800mm. However, distribution of moisture throughout the year is more important than annual rainfall total. Even in rainfall areas greater than 1000mm, growers will irrigate in the dry season or dry months to maintain adequate soil moisture.

Young trees do not tolerate drought and require irrigation during dry spells. However, once established the trees are relatively hardy and recover quickly from dry spells.

In the wild, several types of anise myrtle exist, although the differences are chemical rather than physical.

Anise myrtle contains a number of chemicals that influence the flavour of the leaf. The type used for commercial purposes has a high content of trans-e-anethole with a low estragole and cis-anethole content. The other type, with a high estragole content, is regarded as unsuitable for commercial production.

Most trees in commercial plantings have been selected from high trans-e-anethole varieties and propagated commercially.

Plantation layout is important to optimise growing conditions for the trees. The field should have a northerly aspect to maximise exposure to sunlight, and ideally, the rows of plants should run north–south to give equal sunlight to all plants, year round. Plantation layout also needs to take into consideration the best design for machinery access and minimising soil erosion, therefore a compromise of true north–south rows may be needed.

The plantation is generally established using plants grown from cuttings, and these are placed in cultivated planting rows, 1.2–1.5m apart in single rows. The spacing between rows will be determined by the width of machinery that is used for maintenance and harvesting, but is generally 3–4m wide. Seedlings require irrigation to ensure good establishment and mulching will assist with moisture retention in the soil.

Anise myrtle in plantations will require some wind protection. Regular pruning will reduce the risk and windbreaks or shelterbelts can lessen the impact of prevailing winds, especially during the stormy season. Native species can be used for windbreaks, however care should be taken with species selection as some may increase disease potential in anise myrtle.

There is limited information on the water requirements of anise myrtle. Irrigation should be available, especially when trees are young and as the plantation establishes; extremely dry conditions should be avoided. Anise myrtle grown from cuttings does not have a deep taproot, so it depends on ample surface moisture and mulch to maintain leaf productivity in dry seasons. Irrigation throughout the dry season is recommended, however, must be carefully managed to avoid extended periods of waterlogging. Soil moisture monitoring equipment, such as tensiometers, allows for accurate soil water management.

The nutritional requirements of anise myrtle are not well documented. It is recommended that trees be harvested up to two times each year, with each harvest removing a large amount of biomass. Even on fertile soils, it is essential to return nutrients for long-term productivity. As more experience is gained with crop management, objective nutrient assessment techniques will become available.

Pruning of anise myrtle should occur regularly within the first years to shape the trees into a hedge, about 2.0–3.0 metres tall. This will also increase leaf production. Once established, regular harvesting increases leaf production and keeps the tree from becoming woody. On occasion, established trees may require pruning (in addition to harvest) to reduce woody material and increase subsequent yields.

Weeds need to be controlled at seedling establishment to reduce competition for nutrients, water and sunlight. Mulching the planting row will help suppress weed growth. Once established, very little weed control is needed. Hand weeding is required on occasion to remove rainforest trees, such as camphor laurel, that germinate from seed spread by birds. Once established the anise myrtle has a heavy leaf growth to ground level, preventing weed growth under the tree. Kikuyu is managed by running the mower underneath the leaf canopy, a short way into the hedgerow.

Historically, anise myrtle has had a remarkable resilience to pests and disease with sporadic outbreaks of sooty moulds — especially if the plantation is in close proximity to other native trees that can harbour the moulds. Occasional attacks of the Monolepta beetle (Monolepta australis) have been observed on juvenile leaves but permanent damage has not been reported.

Recently, myrtle rust has become a serious disease concern for several native food species, especially anise myrtle. Myrtle rust is a fungal disease first found in Australia in April 2010 but by December 2011, it had spread from Cairns in far north Queensland to Victoria. Left untreated, the disease can cause deformed leaves, heavy defoliation of branches, dieback, stunted growth and even plant death.

The cultivation of anise myrtle requires standard equipment for plantation maintenance such as a tractor, mower or slasher, and sprayer.

An irrigation system and soil moisture monitoring equipment is required if production is to be maximised.

Anise myrtle tends not to be a viable business as a single enterprise, therefore harvesting and drying equipment would not be a viable investment, unless it was going to be used for other species as well. Growers generally use a contractor for harvest and drying.

Harvest equipment is based on modified vineyard pruning saws mounted on the front of a tractor, which cuts the material from the trees in a hedging fashion. There is no standard harvesting equipment because the industry has had to modify machinery used in other horticultural enterprises.

The equipment, however, requires the capacity to collect the leaf material once it is cut, which may involve sweepers attached to the tractor that transfer the cut material into a trailed bin. Some bins are custom-designed to fit into the drying facility, eliminating the need to handle the product between harvest and drying.

At harvest, leaf and stem material is cut from the tree. Depending on the end product and quality required, leaf may be dried on the stem or stripped from the stem before drying. The leaves must be dried quickly to preserve the anethole content. The dried leaves are milled or ground according to end product requirements, and then stored in dark, temperature controlled environments.

Anise myrtle essential oil is produced by steam distillation of the fresh leaf and stem material. Distillation should be carried out as soon as possible to ensure the highest quality oil. If the trees are overgrown and have thick stems (greater than 30mm), the harvested material may be chipped before distilling.

The dried leaf and extracted oil may be further processed and packaged on farm and sold as value-added product; or they may be sold as raw product to distributors, wholesalers or processors for further manufacturing.

The industry stocktake reported that anise myrtle was oversupplied for existing markets. Small-scale producers claimed that there was a lack of demand and they were only harvesting to fill ad hoc orders. By contrast, large producers who were filling larger volume orders primarily for export, claimed supply and demand to be in balance.

The market for anise myrtle is far less developed than that for lemon myrtle. Research has shown that the health benefits of the two myrtles to be similar, so this may provide opportunities for the promotion of anise myrtle in the future.

There are several challenges common to all native food producers and their industry more broadly, such as annual variation in production volume, low return on raw product, and concurrent oversupply of niche markets and undersupply of potential large-scale markets.

A major risk to the productivity of anise myrtle trees is the fungal disease, myrtle rust, which affects a range of species and native food plants. Left untreated, the disease can cause deformed leaves, heavy defoliation of branches, dieback, stunted growth and even plant death.

There are no specific regulatory requirements for the production of anise myrtle. Some producers of native foods choose to participate in Freshcare, which is currently the largest Australian on-farm assurance program for fresh produce for on-farm food safety and quality and environmental certification services. When processing raw product and value-adding, consideration should be given to food standards regulations, as administered by Food Standards Australia New Zealand (FSANZ) and set out in Chapter 3 of its Food Standards Code. Information about certification can be found at, but is not limited to, the websites of Freshcare and HACCP. 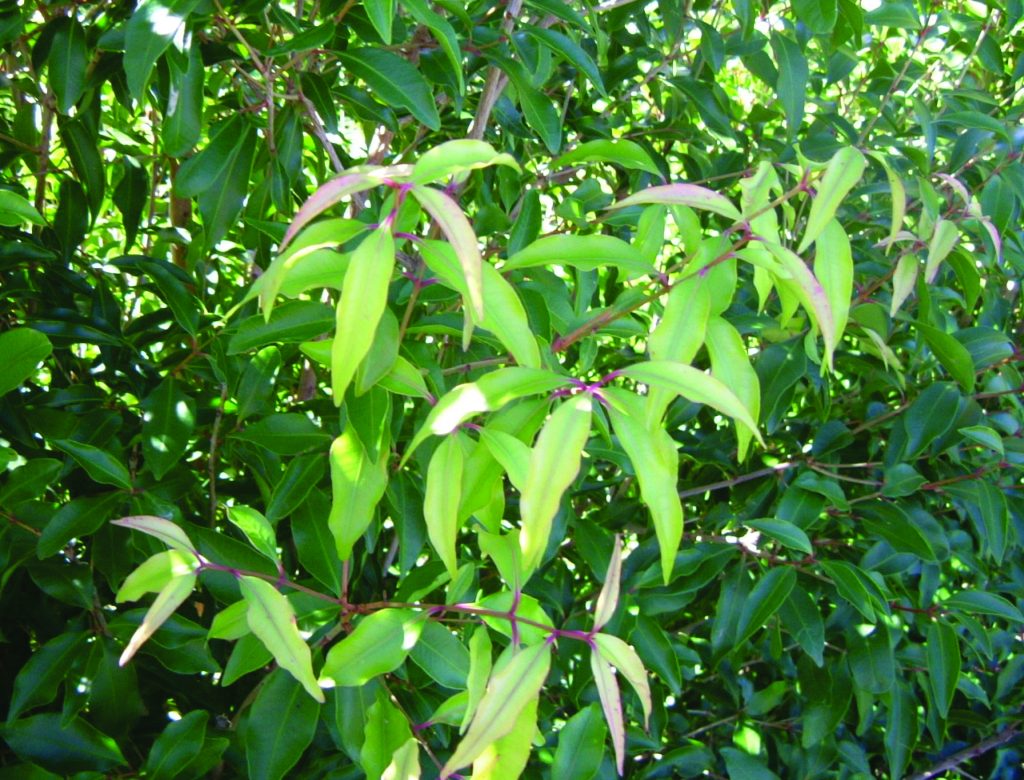