Like many cucurbits, bitter melon is an annual climber, which bears both male and female flowers. It has deeply lobed leaves and bears a profusion of yellow flowers with a high proportion male. The fruit is generally cucumber shaped and has a distinctive warty appearance. However, appearance varies widely between varieties, with colour ranging from pure white to dark olive green; size from barely 5cm to over 40cm; and the bumps being smooth and rounded to sharp and ridged.

Bitter melon is consumed as an immature fruit in many Asian and Indian cuisines. The fruit is cut open and the seeds and membranes removed. The flesh is then prepared in a variety of ways, sometimes including salting beforehand to remove excess bitterness. Bitter melon can be found in salads, soups, stir fries, curries or just lightly steamed and eaten with sauce. One popular method involves stuffing the internal cavity with a meat based filling then cooking by either steaming or baking.

As a tropical fruit, bitter melon is ideally suited to winter production in the Northern Territory, with summer production through Queensland and as far south as Sydney. There is potential to grow it using protected cropping systems in cooler areas and out of peak season. It is grown on trellises and hand harvested continuously throughout the growing season. A generally hardy crop, proper assessment of harvest maturity is important as this can have a major impact on crop quality, yield and value.

The majority of Australian production of bitter melons is sold domestically through central markets and directly through retailers (especially those with a large south east Asian clientele) in Sydney, Brisbane and Melbourne.

All bitter melons produced in Australia are consumed domestically. It is usually produced on small areas of small landholdings, e.g. 0.5ha of bitter melons may be grown on properties of 5 or 20ha, in conjunction with other horticultural crops. 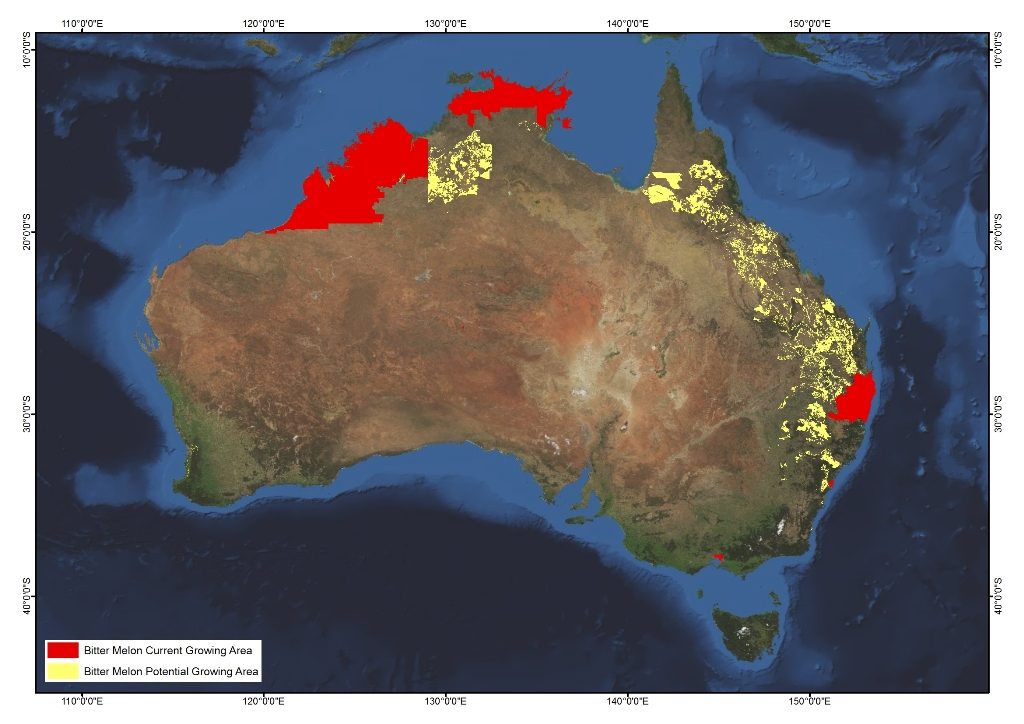 Bitter melon is generally consumed as an immature fruit in many Asian and Indian cuisines, although when they ripen to an orange colour, the membrane around the seed turns bright red and sweet and they can be also be eaten at this stage. It is considered by Asian cultures to confer a wide range of health benefits. The fruit is cut open, the seeds and membranes discarded. The flesh is then prepared in a variety of ways, sometimes including salting beforehand to remove excess bitterness. Bitter melon can be found in salads, soups, stir fries, curries or just lightly steamed and eaten with sauce. One popular method involves stuffing the internal cavity with a meat based filling then cooking by either steaming or baking. Young shoots, leaves and flowers are also consumed.

The fruit may have health benefits, with some trials suggesting that it has hypoglycaemic properties. That is, consumption reduces and stabilises insulin production in the body. This suggests its potential use in moderating the effects of type II diabetes. Research is continuing worldwide in this area. One Australian research project based at the University of Newcastle, is examining the bioactive properties of five bitter melon varieties (including antioxidant activities) and also methods of encapsulating dried, powdered bitter melon, to mask its bitter taste when incorporated into supplements or foods.

In Australia, bitter melon is produced in the Northern Territory during the dry season (March to September). There is also production in northern Western Australia, the Northern Rivers district of New South Wales, in the Sydney region and even Melbourne during summer.

Being a cucurbit, bitter melon prefers well-drained soil, rich in organic matter, with a pH(water) of 6.0–6.5.

Bitter melon prefers a hot humid climate. Unlike some other cucurbits, it is tolerant of high rainfall and can be grown through the wet season on mounded, well-draining beds. Irrigation is required where rainfall is not sufficient.

The predominantly grown variety in Australia is Moonlight, a Taiwanese hybrid with bumpy skin. Chinese varieties, such as Hanuman, and Vietnamese and Filipino varieties, such as Jade, are also increasingly important. The Chinese varieties are pale green with bumpy skins, while the Taiwanese and Filipino varieties tend to be longer, darker in colour and with sharper, more distinct bumps than the Chinese types. The tiny, extremely bitter varieties preferred by Indian and Sri Lankan consumers are also dark in colour and have sharp bumps almost like serrations.

Bitter melons are grown in raised beds and trained on trellises as a vertical or canopy crop. The trellises are usually 1.8–2m high and a tractor width apart, to enable access for spraying. Seeds can be direct sown or seedlings planted 2m apart, although some growers plant at higher densities. Green manure crops are often grown prior to planting to boost fertility levels. Drip irrigation and plastic mulch are recommended to achieve optimum production. Like many cucurbits, bitter melons are heavy feeders, with the result that hydroponic systems using bags and dripper systems are increasingly used to maximise production.

There are yield constraints in the production of bitter melon due to problems with flowering. Male and female flowers are borne separate on the same plant (monoecious) but their ratios can be affected by adverse climatic conditions which can also affect pollination. Pollination can generally be improved with the introduction of beehives at the crop site.

Bitter melons can be infested by a number of species of fruit fly, as well as damaged by thrips or more rarely by heliothis or whitefly. Ginger ants can be a problem in the Northern Territory, attacking the seeds and seedlings, while root knot nematodes have also been reported. Diseases potentially affecting bitter melon include powdery mildew, fusarium and mosaic viruses. Bitter melon should be grown in a crop rotation, to ensure they are only grown in the same soil once every four years. The rotation crops should not host the previously mentioned diseases.

There are no pesticides registered for use on bitter melon in Australia, however off-label use permits are available. It is necessary to check with the relevant state department for current permits.

Infrastructure requirements for the production of bitter melon include a tractor and some type of bed former, trellis materials, irrigation and spray equipment, and a cooling and cool storage facility after harvest.

Bitter melon is harvested by hand, every two or three days, for the length of the fruit production season, therefore it is quite a labour intensive enterprise. A crop will produce its first flush of fruit 50–70 days after planting. In the Northern Territory, harvest is concentrated in the dry season from May to October; in the Northern Rivers of New South Wales from January to May; and near Sydney and Melbourne from December to February. Harvest will then continue in a cycle of producing new growth and fruiting until the vine is terminated. The first pick is usually the highest quality.

The most difficult task in the production of bitter melons is determining harvest time. As bitter melons are picked and consumed at an immature stage, gauging the time of harvest is critical. If the melons are left too long on the vine, they will rapidly turn yellow after harvest, splitting to reveal mature seeds covered in red flesh (aril). Yellowing fruit are unsaleable mainly due to extreme softness but the sweet flesh around the seed can be eaten.

The fruit is also sensitive to ethylene, which is given off by ripening fruit. Storage with ripening or decaying fruit or vegetables can therefore induce premature yellowing and ripening in the whole load.

As a tropical fruit, bitter melon is chilling sensitive. Chilling sensitivity may be affected by variety, growing conditions, and initial fruit maturity. In general, fruit cannot be stored below 5°C for more than 2-3 days without inducing water soaked lesions, pitting and rots. However, bitter melon is also extremely susceptible to rots and decay at warmer temperatures. The result is a short storage life of 7-10 days, maximised at around 5-7°C.

The largest markets for bitter melon are in Sydney and Melbourne, where the highest populations of Asian and Indian consumers are based.

Bitter melon is not exported from Australia due to the cost of transport of bitter melon relative to its low value and its highly perishable nature. Additionally, competition from locally-produced, low-priced bitter melon means that exported Australian produce would not be competitive in other countries.

The main risks for producing bitter melon are the selection of planting material, the timing of harvest, establishing a market for the product, and within and between season price fluctuations. The latter are caused primarily by changes in supply. While these challenges are common for many vegetable crops, they can be serious issues for new growers. Careful planning before planting will increase the success of bitter melon production.

When growing and packaging produce for the food market, consideration should be given to food standards regulations. Currently there are no industry-wide product descriptions or quality standards developed for bitter melon.

Some producers of Asian vegetables choose to participate in Freshcare, which is currently the largest Australian on–farm assurance program for fresh produce for on-farm food safety and quality and environmental certification services. Further information can be found at the websites of Freshcare, HACCP and Food Standards Australia New Zealand.

Additionally, quarantine issues may need to be addressed if bitter melons are marketed interstate.

Another regulatory consideration relates to the use of pesticides as there are currently no pesticides registered for use on bitter melon in Australia, however off-label use permits are available. It is necessary to check with the relevant state department for current permits.

HACCP Australia  is a leading food science organisation specialising in the HACCP Food Safety Methodology and its applications within the food and related non-food industries. 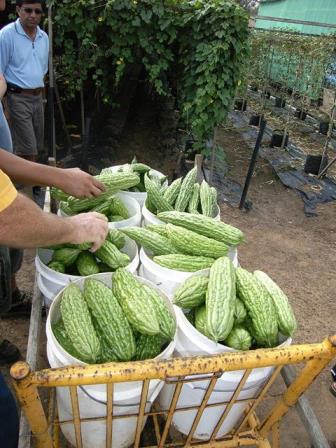 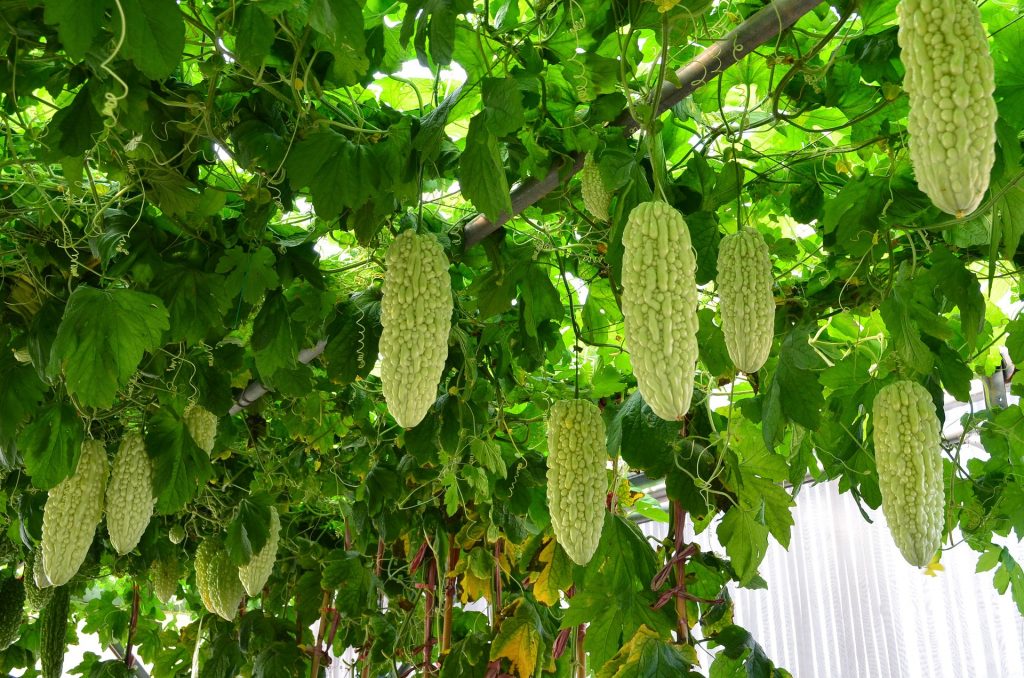 Bitter melon growing on a vine 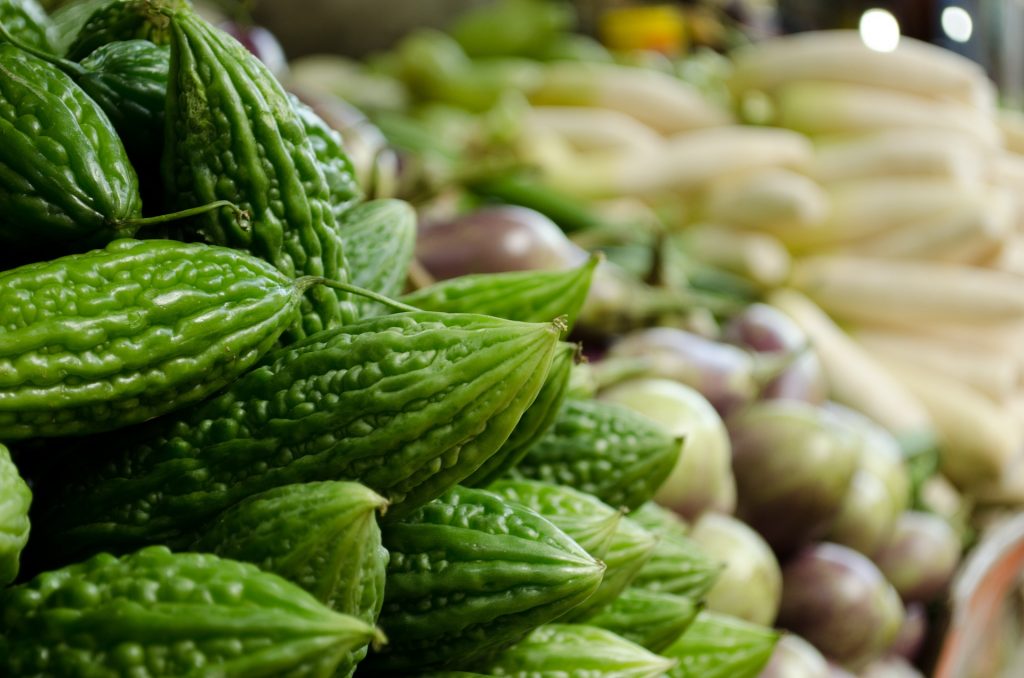 Fresh bitter melon ready for sale at a market stall