Barnyard grass, an annual summer grass weed in Australia, competes with the establishment of rice in the water efficient drill sown rice system, causing rice yield losses and quality issues. Yield losses of up to five tonnes per hectare have been reported due to barnyard grass, and it’s estimated that the weed can remove up to 80% of soil mineral nitrogen.

“Barnyard grass is a major constraint as growers shift to water saving strategies in rice,” she said. “The problem is in these systems, such as drill sown rice and delayed permanent water, barnyard grass proliferates – it grows really well.”

Seeking an alternative control method, Jhoana observed that some New South Wales Riverina ricegrowers who were using pasture legumes in rotation with drill sown rice were successfully managing their barnyard grass seedbank. But there was limited literature on the inclusion of pasture legumes in the rotation to suppress weeds and the factors that contribute to the germination of barnyard grass.

Jhoana’s research, funded by the AgriFutures Australia Rice Program and supported by Charles Sturt University, Rice Research Australia Pty Ltd (RRAPL) and the Ricegrowers Association of Australia (RGA), set out to demonstrate the effectiveness of this strategy, outline best practice and how suppression with pasture legumes could be integrated with other weed management tools.

Conducting her trials at the University farm, Jhoana found that including at least two rotations of pasture legume species with other weed management tools and strategies gradually depleted the barnyard grass seed bank.

Over time winter pasture legumes had the most significant positive effect against barnyard grass compared with other rotation species in rice-based systems, such as winter crops or fallow.

“The best results can be achieved from using allelopathic pasture legume species or cultivars in combination with different weed management practices such as no-till, the stale seedbed technique, delayed sowing of rice and using sowing implements with minimal soil disturbance, such as discs,” she added.

Jhoana concluded that tackling barnyard grass with a combination of techniques, tools and strategies is vital to controlling the ecotype found in the drill sown rice area of south-east Australia.

She also found that barnyard grass is sensitive to shading and that sowing a weed competitive rice cultivar with early vigour could hinder the early development of barnyard grass.

Moulamein, NSW rice grower Leigh Vial includes winter pasture legumes in his rice rotation for livestock feed. Learning that sowing rice into undisturbed pasture legume residue is beneficial for weed control has given him confidence to alter his herbicide treatments.

This research could also help boost the uptake of water saving practices such as drill sown rice and delayed permanent water, according to Leigh.

“Another string to our bow with respect to controlling barnyard grass, it’s further improving water productivity,” he said.

“Having an intact legume residue, you can get suppression of grass weeds for eight to 10 weeks at the start of the season, well that’s going to be really helpful because that’s when grass weeds can pull delayed permanent water and aerobic systems apart.”

Water supply may be abundant this season, but Jhoana believes there will be further adoption of water efficient rice growing practices such as drill sown rice and delayed permanent water.

Given many ricegrowers already include pasture legumes in their rotation to profitably feed sheep, she said adopting this pasture legume suppression method would not necessarily be an expensive barnyard grass management strategy and it would add to their productivity and profitability.

Listen to Jhoana’s AgriFututres On Air interview about her research below. 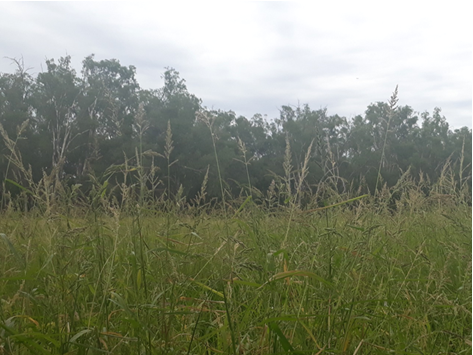